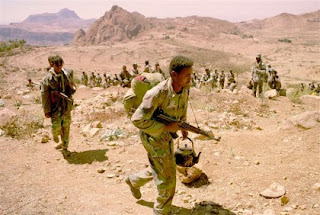 Ethiopia and Eritrea are still at each others’ throats. The two neighbours fought hammer and tongs in sun-baked trenches during a two-year war over a decade ago, before a peace deal ended their World War I-style conflict in 2000. Furious veRed Sea, UNrbal battles, however, have continued to this day.

Yet, amid the blistering rhetoric and scares over a return to war, analysts say the feuding rivals are reluctant to lock horns once again. Neighbouring South Sudan and some Ethiopian politicians are working on plans to bring both sides to the negotiating  by Savings Sidekick” >table.

Asmara has been named, shamed and then slapped with two sets of U.N. sanctions over charges that it was aiding and abetting al Qaeda-linked rebels in lawless Somalia in its proxy war with Ethiopia. However, a  by Savings Sidekick” >panel tasked with monitoring violations of an arms embargo on Somalia said it had no proof of Eritrean support to the Islamist militants in the last year.

Nevertheless, Eritrea’s foreign ministry wasted little time in pointing a finger of accusation at its perennial rival. “The events over the past year have clearly shown that it is in fact Ethiopia that is actively engaged in destabilising Eritrea in addition to its continued occupation of sovereign Eritrean territory in violation of the U.N. Charter,” the ministry said in a statement last month.

The Red Sea state was referring to Addis Ababa’s open declaration in 2011 in which its late Prime Minister Meles Zenawi said his  by Savings Sidekick” >country would no longer take a “passive stance” towards its rival following Eritrea’s alleged plot to bomb targets in the Ethiopian capital during an African Union gathering of heads of state.

The love affair did not last long. The pair fell out spectacularly after Eritrea introduced its own currency in 1997 and Ethiopia responded by insisting on trading in dollars. Their economic spat aggravated already simmering border tensions, which culminated in Eritrea deploying its tanks months later and occupying hotly disputed territory that was under Addis Ababa’s administration.

Ethiopian troops breached Eritrea’s trenches nearly a year later and retook contested ground – namely the flashpoint town of Badme – before a peace deal was signed. What then followed is the sticking point that remains today. An independent boundary commission awarded Badme to Eritrea in 2002 but the ruling is yet to take effect. Ethiopia wants to negotiate its implementation and warns that delimitation of the border as per the finding would unreasonably split towns and other geographical locations into two.

Asmara on the other hand insists on an immediate hand-over. The bickering has evolved into a proxy war and diplomatic skulduggery as both sides attempt to bring about regime  by Savings Sidekick” >change in the other. But despite the harsh words, mediation efforts are in the pipeline. Deng Alor, neighbouring South Sudan’s Minister for Cabinet Affairs, told Reuters on Wednesday his newly-independent country is about to embark on rounds of shuttle diplomacy between the capitals of Ethiopia and Eritrea. Both countries, he said, have given their blessing.

A handful of Ethiopian  by Savings Sidekick” >members of parliament are also devising a similar initiative, local sources say. Addis Ababa has never ruled out mediation. But even though Eritrea publicly dismisses any idea of a thaw in strained relations before the Badme spat is resolved, recent developments might change its mind, some believe.

Ethiopian analysts think Asmara now realises that its neighbour may easily adopt a more belligerent stance following the sudden death of Meles, who they say stood firm against a potential slide towards full-scale conflict. And of course not all Ethiopians express enthusiasm about an independent Eritrea, the creation of which left their country without  by Savings Sidekick” >access to the Red Sea.

Some diplomats say the chances of both sides making drastic concessions from their current positions remain slim. So will the mediation efforts finally yield a deal?