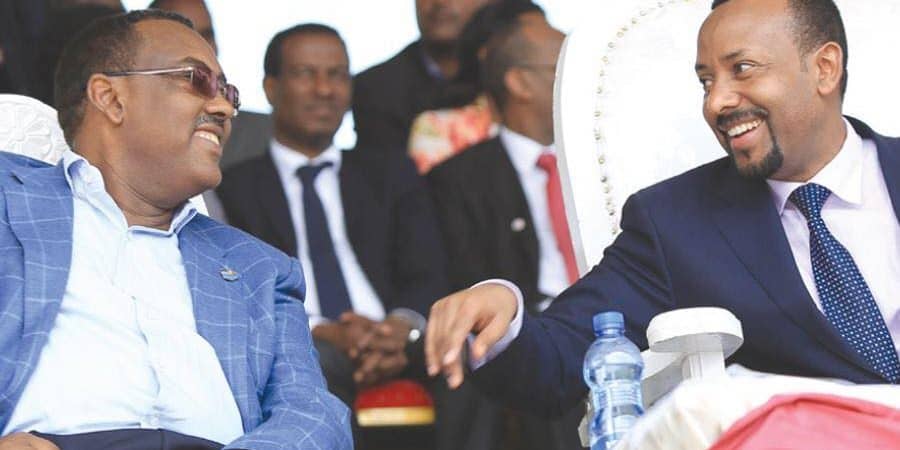 Ethiopian soldiers were made a sacrificial lamb for TPLF by lack of intelligence.  After Ethiopian soldiers rose from the ashes like sphinx and dealt a blow to TPLF, their name and the reputation of Ethiopia is muddied by the failure of Dr. Abiy and Deneke Mekonnen, the foreign minister to wage a viable PR campaign.

Ethiopian soldiers paid a great sacrifice to give Ethiopia a victory against TPLF; however, this sacrifice is being wasted, Ethiopia’s name is sullied by the international arena.

Despite the euphoria arising from victory against the Tigre People Liberation Front (TPLF) junta, things could have been disastrous if it were not for Eritrea, where escaping soldiers faced friendly faces instead of bullets or for the wise actions of some generals like Nasir Abagida to flee to Eritrea to regroup.  While we are grateful for Eritrea, now is probably the time for Eritrean troops to return to Eritrea and move to the Sudanese border to save Ethiopia one more time and to reduce international attack on Eritrean troops fanned by TPLF agents.

This lack of intelligence and failure to penetrate rogue groups like TPLF, OLF and others is very consequential and could have been disastrous. Imagine if TPLF had succeeded to destroy the Ethiopian armed forces and took over the country again.  Thanks to Eritrea and wise leadership in the military, we can still breathe a sigh of relief.

Instead of telling the world with evidence by interviewing people in the impacted area, Ethiopia ignored the invasion and now Sudan like TPLF is informing the world as a victim. Like all events taking place in Ethiopia TPLF attack or Hachalu’s assignation, Ethiopia is blamed because of lack of smart PR.

The EU suspension of aid and U.S. support for Egypt

The EU suspension of aid and U.S. support for Egypt on the GERD are primarily due to poor communication and PR.  For the last two years there were serious flaws in intelligence gathering and PR in Ethiopia. One of the attractive parts of Dr. Abiy resume was his intelligence background. Unfortunately, we see more PR and intelligence failure than any time in Ethiopian history, even worse than Mengistu’s Haile Mariam’s regime.

TPLF Attack on Ethiopian forces could have been aborted:

TPLF’s decision to slaughter Ethiopian armed forces and steal military arsenal and to degrade Ethiopia’s   ability to defend itself from foreign aggression is bad enough,   worse is the failure of the Ethiopian government to penetrate the ranks of TPLF, OLF, and the likes of Jawar Mohammed and others.

During Mengistu Hailemariam, TPLF made a mockery of Ethiopian intelligence by penetrating every business, and military operations to eventually drive Mengistu Hailemariam into exile and occupy Ethiopia. This enabled TPLF to exploit the country for 27-years and destroy its fabric as a nation.

TPLF used to listen to every communication emanating from Ethiopian military and other government operatives. TPLF knew their targets, the name of the pilot, type of airplane and route of every air force plane before it took off, and allowing it enormous strategic advantage over the Ethiopian military.

Why Did Sudan Invaded Ethiopia?

Lack of intelligence gathering have many consequences including the loss of life and property to a domestic and foreign enemies. The primary reason why Sudan dared to invade Ethiopia is as a result of heavy loss of life and equipment in Tigray. Sudan and Egypt were probably in cahoots, but had Ethiopia fielded good intelligence, it would have aborted or taken a preemptive strike to demobilize TPLF and avoided the initial humiliation suffered by its soldiers, the loss of life and military equipment.

Since Dr. Abiy took over, there were many avoidable tragedies in terms of ethnic conflicts, assassination atttempts, and coup attempts primarily orchestrated by rogue elements. The most embarrassing were the penetration of Dr. Abiy’s residence by rag tag soldiers in Addis with an intention to assassinate him and the recent visit to Benishangul and the massacre on the following day.

Despite knowing an inevitable conflict, knowing TPLF background and manners, and how they dealt with EPRP, TLF and OLF and others in the past, Dr. Abiy did not take the necessary preemptive action in providing information or in readiness to save Ethiopian soldiers that were stranded in Tigre for years.  Never in the history of armed forces, was such massacre allowed to take place in such willy- nilly fashion. During a brief trip to Kenya, I learned how TPLF soldiers crossed to Kenya and slaughtered OLF combatants while asleep, illustrating TPLF common practice.

Why is it so difficult for the Ethiopian government to plant agents inside TPLF and OLF ranks, under ethnic special forces and police, as well as in the ranks of Sudanese and Egyptian diplomats or intelligence services? Ethiopia has millions of unemployed and underemployed people from brother industry to college graduates from all ethnic groups. As far as Egypt, the Nubians who have affinity and kinship with Ethiopia and who are at odds with Egypt are the best bet to learn about troop movements. For example, troop movements from Egypt to Sudan or Ethiopia can be extracted from Nubians, who are located south of the Aswan Dam or Egypt. It is just a simple telephone call to alert Ethiopian intelligence services.

The plot to assassinate Hachalu Hundessa in June, 2020, the plot to assassinate Dr. Abiy in June 2018, and President Ambachew Mekonnen in June 2019, or the uprising in Hawassa, the OLF-Shane robbery and kidnapping in Wollega, the massacres in Shashamene and Metekel, or Jawar’s import of listening equipment to monitor Dr. Abiy phones are obvious incidents that should have been penetrated and aborted with good intelligence. During Melese for example, Al-Shabaab’s effort to bomb Addis during the AU summit and other attempts were aborted. TPLF was able to listen to opposition communications, even kidnap Andarkachew Tsige in Yemen, and though illegal showed some semblance of good information and intelligence gathering.

Ethnic Federalism is the cause of bloodshed and conflicts:

What enabled TPLF to build such a powerful ethnic army is primarily the ethnic federalism that TPLF created, which allows ethnic groups to create their own police, militia and army. Dr. Abiy had a chance to modify or eliminate Killil, the nefarious and evil system created by TPLF that has been the cause of much bloodshed and displacement.  No country allows ethnic policing or ethnic militia like Ethiopia, which is the reason for its instability, displacement of millions, ethnic massacres and ethnic xenophobia.

Recent massacres in Benishangul, Walkite, Shashamane, Ziway and other places should not have taken place if it were not for ethnic policing. For example in Shashamene, if the attackers suspected that the police were not with them or if the police would resist, they would not have come just with machete to kill and burn. It is with this understanding that they were able to do all these pillaging and killing.

Ethnic federalism has been a dagger in the heart of Ethiopian unity and peace. The war is a direct result of the formation and promotion of ethnic federalism. So Ethiopians need to look this conflict in the prism of Killil and all the damage it is causing and the need to abolish it. It is dangerous for each tribe to have its own militia and police in such a polarized society, especially in the era of social media that can trigger any conflict with unsubstantiated or sometimes fake news.

Since the appointment of Muferiat Kamil as Peace Minister Ethiopia has suffered more conflict than ever. I wonder if the money could have been spent better in hiring police or training intelligence officer to detect and abort instead of giving such power to Muferiat. So far, she has been ineffective and probably suspect.

Another Woyane scheme was the establishment of one-five to further monitor every activity of Ethiopians, and creating over 6 million cadres. Abiy was advised to co-opt Qeerroo, Fanno and Zerma and others into peace and a democracy cadre instead of letting them being hijacked by Jawar and other ethnonationalists. Instead of destroying one-five scheme, it could have been reorganized an economic development and peace force instead of a spy agency under TPLF.

Dr. Abiy modernized the armed forces and instilled nationalism; however, he made many intelligence blunders by failing to detect and abort and worse to learn from its mistakes. Despite knowing the history of TPLF, many warnings and provocations, letting Ethiopian soldiers stay in Mekele without providing adequate intelligence, preparation or protection was unforgivable.

If such intelligence failure continue, the Abiy government, as well as Ethiopia, are at risk of imploding or a TPLF-like takeover again. Ethiopia needs someone credible in charge of intelligence and PR with ability to marshal forces for the defense of the country. From past incidents, it appears the Abay government has no knowledge or no idea of what is happening in the country and to keep the country safe from rogue forces. Dr. Abiy’s method is reactionary instead of preemptive, probably shackled by the emblem of a Nobel Laureate for peace.

Pushing Ethiopia into war at every opportunity sacrificing scarce resources and human lives could have been prevented with good intelligence and preemptive actions in Mekele and other places. With all the forces in Tigre, it may have been possible to capture TPLF leadership a long time ago in one sweep operation at their residence or in a meeting or at least monitor their activities.

One of Abiy’s resume that made him attractive was his intelligence background, however, so far TPLF and other nefarious forces are outsmarting him in intelligence gathering and PR resulting in massacres at home and in PR debacle worldwide. Worse, failure to abandon ethnic federalism will further prolong the agony and undermine the push to promote economic development and peace in Ethiopia.

Ethnic system distorts the allocation of talent, resulting unqualified people or cronies to take position that ultimately a disservice to them and to the nation. Gedu Endalkachew, foreign minister and General Ahmed Adam, defense were two examples. Keeping former loyal TPLF supporters regardless of their ethnicity should be looked at with suspicions, because they may have lacked the moral campus, Ethiopianawinet or competence. The list includes Redwan, Muferiat, Gedu, Tewolde and others.  Furthermore, the problem of ethnic federalism is damaging Ethiopia in PR and can weaken its national defense.  Failure to address or eliminate ethnic federalism is a great moral and political failure of gargantuan proportion

If truth be told, America’s foreign policy in Ethiopia is hypocritical and dishonest!