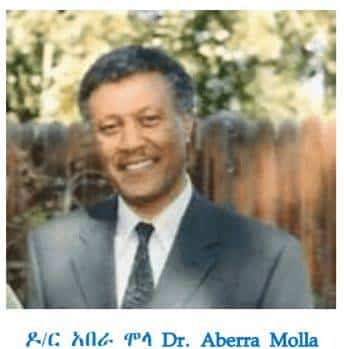 Dr. Aberra Molla, 2017 Honoree of The Ethiopian Heritage Society in North America Dr. Aberra Molla, a scientist and an inventor is also known as the father of Ethiopic. Inspired by the creator of the Amharic typewriter, Ethiopian engineer Ayana Birru of Horo Gudru, Wellega; Dr. Aberra computerized Ethiopic/Geez more than 29 years ago. However, replacing the Latin characters with Ethiopic character parts of the Amharic typewriter was not a viable option for Dr. Aberra because there were more Ethiopic characters than the Latin alphabet keys. Therefore, he invented a method for computerizing Ethiopic, its layout and character entry. That for the first time enabled Ethiopians to use their alphabet and languages on computers. He was unable to protect his technology in Ethiopia as patenting was alien there at the time, though his primary interest was to share the royalty with Ethiopians while encouraging respect for intellectual property.

More recently, he invented a method of rendering the more than 564 Ethiopic Unicode glyphs on computers utilizing at most two keystrokes each and he has pending United States and Ethiopian patents. He made his novel technology freely available on the Internet so that Ethiopic users search and type in Amharic for free. Dr. Aberra also holds several patents in his professional field of Agriculture and in computerizing Geez/Ethiopic. Dr. Aberra Molla was the 2017 honoree at the 7th Annual Festival of the Ethiopian Heritage Society in North America (EHSNA). The festival took place at One Veteran Place, Silver Springs, MD 20910 on November 19, 2017. The Award of Recognition reads as follows: ETHIOPIAN HERITAGE SOCIETY IN NORTH AMERICA EH“NA Hereby Recognizes & Presents This Prestigious Award of Excellence to DR. ABERRA MOLLA in recognition for inventing the Ethiopian Geez script of one set screen and printer. This innovation, the first Ethiopian word processor of its kind, has enabled Ethiopians to effectively communicate in Amharic, the national language of Ethiopia, on computers and other similar devices. Furthermore, we proudly recognize your overall contribution as a scientist, a researcher and an entrepreneur. THEREFORE, on behalf of the Board of Directors of EHSNA, and all Ethiopians we hereby express our boundless gratitude, love and admiration. For and on behalf of the Board of Directors, Yeshitla Araya, President November 19, 2017. Dr. Aberra and his wife Senait Ketema are residents of Colorado since 1975. They own a software company, Ethiopian Computers & Software. Dr. Aberra Molla can be reached at [email protected]