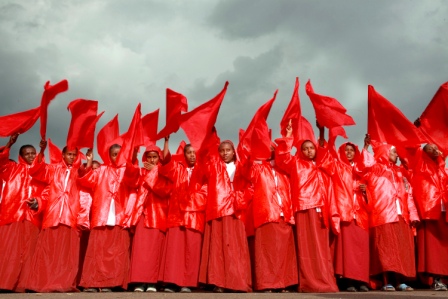 On the evening of the 20th of March 1878, Ethiopia’s two great rivals, Emperors Yohannes IV and Menelik II, came face-to-face to thrash out their differences.

As the two men met for the first time, traditional Ethiopian singers are said to have sang “A road that is perilous is far / you have to climb and then descend.”

Ethiopia’s journey since then has certainly been perilous.

It has been marked by great heights like the defeat of Italy’s colonialist army at the battle of Adwa in 1895. And devastating lows such as the 1984 famine that killed more than 1 million people and brought the country long-lasting notoriety.

The huge nation is again heading into interesting times.

This week the government of Prime Minister Meles Zenawi agreed a code of conduct for next May’s national elections with three opposition parties — two of which are dismissed by opponents as ruling party satellites.

But the biggest opposition force, a coalition of eight parties called Medrek (the Forum), did not participate in the negotiations despite repeated invitations.

Medrek said issues including reform of the national electoral board and access to the media were left out. But some Ethiopians suspect that opposition leaders just can’t stand the thought of sitting down with government negotiators.

And a lot of the opposition parties seem to despise each other, too.

Ethiopian politicians love to talk about democracy. It’s presented as the ultimate political goal for a country that has never had a peaceful transition of power.

And they all disagree on how close they are to finally achieving it.

“Ethiopia believes it is an emerging democracy,” the government’s head of information Bereket Simon told me this week. “We cannot say we have perfect governance yet. But, on balance, we are moving forward.”

Yet the opposition says there is no democracy at all and accuses the government of using the code of conduct negotiations to hoodwink the West — on which it still relies for huge amounts of humanitarian aid.

Ethiopia’s last national elections in 2005 ended in disaster when a previous opposition coalition said the government fixed its victory and street violence broke out in the capital Addis Ababa in which almost 200 protesters were killed.

Many Ethiopians tell me they were so disheartened by that experience that they have lost interest in voting. 2005 also entrenched extremism on both sides.

Some diplomats in Addis Ababa are putting pressure on Medrek to talk to the government, telling its leaders they believe Meles is acting in good faith.

And the government says Medrek can still get involved in ongoing talks.

So, no matter how bitter the rivalry, why haven’t Ethiopia’s main powerbrokers today been able to talk to each other as happened more than a century ago?

Who’s right about how close Ethiopia is to democracy? How can a poor country secure a prosperous future? What are the solutions? Is democracy even one of them?