Perhaps the former USA President Donald Trump was right after all.  Some of CNN’s unprofessional reporters are dragging its reputation to the lowest possible level of journalism. The question is, can the CNN redeem its reputation for fair reporting?

All the CNN’s current news reports on events in Northern Ethiopia has all been a hearsay and lacks concrete evidence and is devoid of journalistic professional ethics. The reports are unbalanced, biased and unfairly prejudiced. The officials of the terrorist Tigray Peoples’ Liberation Front (TPLF) made solemn promise to destroy the ancient land of a very proud nation, Ethiopians. CNN became the mouthpiece of the, TPLF the agents of destruction who openly vowed to carry out their mission even if it takes them “to go to hell and back”. All CNN’s reports regarding Ethiopia lack objectivity and clearly biased. Their journalists’ investigations were not meant to look for the truth, but unfortunately based on hearsay to justify a preconceived projection, seeking evidence that supports their half-baked theory. They misrepresented facts to suit their intended goals and never attempted resort to proper investigation.  Whenever CNN reporters venture out for “field investigation” they don’t seem to be interested in the truth, but rather just focus on gathering fake facts which would help them surf safely along the social media. Finding the truth seems to be their least interest. A journalist without open mind is not a journalist but a party-political activist.

Let us demonstrate what happens when a pseudo researcher conducts an experiment with a preconceived conjecture.
A researcher decided to experiment on one of the five senses of a flea.
He caught four fleas and held them in a special small glass jar. He carried out the following four experiments.
He took out the first flea. He cut out one of its six legs. He said “jump!” and released. The flea disappeared into the thin air. He picked up his pen and wrote down the result of his first experiment on a paper.

He took out the second flea. He cut out two of its six legs. He shouted: “Jump!” and released it. With a little pose, the flea jumped and disappeared. He again picked up his pen wrote down on the same paper his findings of second experiment.
He took out the third flea. He cut out three of its legs. He shouted: “jump!” At first it fell on its chest. After tattering for a while, the poor insect managed to jump somehow. Again, he picked up his pen grinning. He wrote down on the paper his findings of the third experiment. He was almost close to finding out his intended outcome.

He could have stopped his experiment at the third victim. However, for validity of his experiment, he took out the fourth flea. He cut four of its six legs and shouted “Jump! Jump! Jump!” No response. The creature was crawling in agony falling flat.
The researcher wrote his conclusion with a great sense of discovery.
“If you cut four of the six legs of a flea, it cannot hear you!”

The lesson from this is you can do whatever you want to do with material evidence you have in your hands but to use that to fit one’s own foretold conclusion is stupidity. That seems to be the case with the CNN reporting and Ethiopia today. The Sudanese born CNN reporter Nima Elbagir did just that. Nima and her colleagues ventured out to find evidence to prove the Government of Ethiopia has committed “war crime” against Tigrayans, but not in search of the truth. It won the 2021 award for fake reporting.

Nima Elbagir and her crew were given an opportunity to visit Ethiopia for primary data collection. They were all over the Northern region of the country, including the Amhara and Tigray regions. Nima’s mind was fixated on one thing only: a clue for Tigrayan victims! They took her to Mai Kadra and showed her what the TPLF and Samri youth did to the indigenous Amhara people. More than 1,100 people were massacred in that place. She was given the opportunity to talk to the surviving residents. She had the opportunity to see the mass graves. She was horrified they were not Tigrayans victims.

TPLF started the conflict by attacking the Ethiopian National Defence Force (ENDF) on 03 November 2020. The Government of Ethiopia ordered Law Enforcement on 04 November 2020. It dislodged the criminals from Mekele just in 3 weeks. Some of the TPLF leadership were killed and some were captured and still others are on the run. Because of too much unfounded accusations on ENDF in its law enforcement mission, the Government of Ethiopia declared unilateral ceasefire and left Tigray region in June 2021, to give peace a chance. It was a surprise generous move to all parties. CNN did not acknowledge this good gesture. TPLF leadership came out from its hiding holes. Instead of helping the conflict affected people of Tigray, it dug out its heavy weapon from the hidden underground, called back its fighters that took off their military uniform and mixed with the civilians and declared there would be no ceasefire on its part. Rather than accepting the opportunity, and going for peace, the T vowed it wouldn’t lay its arms until topples President Esaiyas Afeworki of Eritrea and PM Abiy Ahmed of Ethiopia. So much for the propaganda of “genocide on Tigray and rape victims!” To make their vow real, they invaded the Amhara and Afar regions and massacred hundreds of innocent men women and children. Reuters reported, in a small village called Chenna Teklehaimanot, in Gondar, 120 people were killed in a matter of hours.  Many mainstream media including BBC, Aljazeera and the Guardian reported this event. An Orthodox priest’s wife was raped and then murdered by the TPLF forces. That was not worthy of material to report for the CNN, because they were not Tigrayan casualties.  On 5 August 2021 in the Galikoma, in the Afar region, there was a mass extrajudicial killing by the TPLF. Over 240 people sheltering at a health facility and school were massacred. That killing included 107 children. CNN was not interested in that story either because that was not what they were looking for. Right now, as this paper is being written, TPLF is bombarding with heavy artillery, the town of Chifra. So far 30 civilians were reported killed during the night. In a small town Although TPLF and its foreign allies/journalists are screaming beyond their voices about Tigrayan victims. Right now, the war is going on outside Tigray in Amhara and Afar regions. They are bombarding cities and town with heavy artillery indiscriminately into civilian homes. France 24 reported “Shell-shocked survivors describe brutal Tigray rebel advance.” 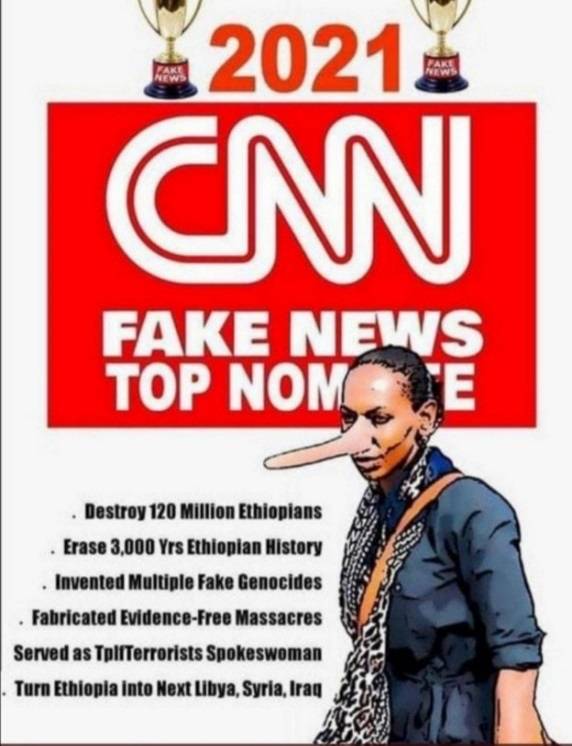 On the contrary, “Nima is breathless screaming “Tigrayans are massacred, Tigrayans are raped!” Where? When? In Tigray or Amhara or Afar regions? Did the TPLF go to Afar and Amhara regions invited for a coffee? To cover up their own war crime they are blaming their own victims. CNN is backing them with unverified fake facts.

Why didn’t CNN consider the leaked UN document that there was no evidence to incriminate Ethiopian Defence Force involving in rape in Tigray? Why did Nima keep quiet about the women of Tigray who went out on demonstration about the TPLF rape culture and were beaten and some even imprisoned by TPLF just before the conflict broke? What about the ten thousand rapists and murderers released from Mekele prison by TPLF before they fled Mekele?

The invading TPLF army has committed brutal crimes. UN food stores looted by the TPLF in Amhara region. Little or no condemnation from the CNN. Hospitals were ransacked, medicines and patients’ food were looted. Schools were destroyed, teaching equipment were stolen and shipped to Tigray. No news about that from CNN.

3 thoughts on “CNN’S CREDIBILITY HUNGING ON A THIN THREAD”