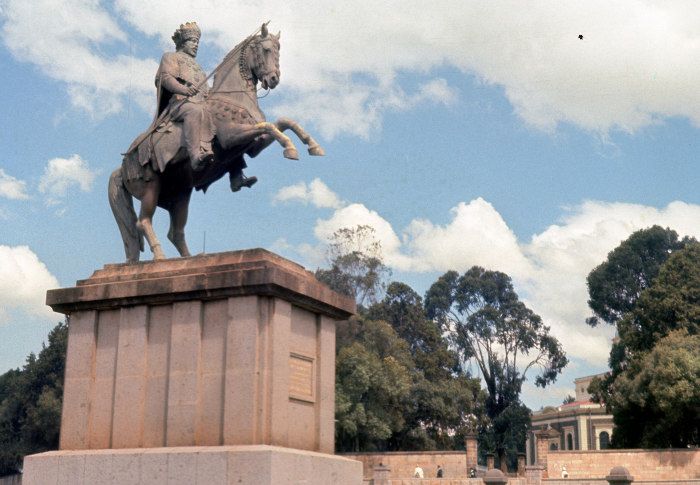 Four days from now, Ethiopia will mark the 125th Victory Day of the battle of Adwa. I can’t write this without mentioning the hate which the world witnessed last June 30, 2020, when the local government toppled and destroyed the equestrian monumental statue of Ras Makonnen, which was sculpted by Laureate Afewerk Tekle. At once, Ethiopia lost two pieces of heritage: a master work of a National artist, Afewerk and a statue which was the symbol of freedom and dignity of a Nation, as represented by ADWA.

Afewerk once said, in an interview which took place in Washington DC, USA, “When I was working on the statue of Ras Makonnen, the Emperor (Haile Selassie) told me not to make the Ras’ statue bigger than the statue of Emperor Menelik in Addis Ababa. He wanted Menelik’s to be a land mark of the nation.”

Why was the statue of Ras Makonnen, the symbol of dignity and freedom, toppled down in Harar? How will we prevent this from happening again?

According to an eye witness, “A Harari police officer, with one hand in his pocket, cellphone in the other, was giving directions on how to topple it down, whilst other officers stood and watched, when the General of ADWA statue, slowly hit the ground.” They made the Italian generals’ bones jump with happiness in their graves.

The statue, beyond its symbol of freedom and dignity, was an icon of Pan- Ethiopianism, the social fabric of the nation, which allows Muslims and Christians from different ethnicities to live in harmony. Ras Makonnen was a product of Tigria, Amhara, and Oromo ethnicity. His wife, Yeshembet, was the fruit of a Christian Gurage and a Muslim Oromo. The couples’ heritage intertwined to create the perfect son, Lij Tafari, who produced a large family, at home and abroad.

A head of time, he was the first to have hired an African from abroad, Joseph Vitalien, a physician, from Guadalupe, to practice medicine in Harar. As a diplomat, he was the first who welcomed international delegates to Ethiopia, before Emperor Menelik met them in Addis Ababa. As Foreign Minister, he was the first to pick an ambassador, who would represent Ethiopia in USA. That person happened to be Honorable Sadik Abdulahi, a native Harari who handed Emperor’s Menelik’s message to President Theodore Roosevelt.

In his selection of a Muslim envoy to USA, he proved wrong those who had the notion that Ethiopia was only a Christian country. He was a visionary who commissioned the building of the first hospital in Harar city. “Ras Makonnen was announcing people to go to the hospital but the people preferred the tradition way,” Mohammed Ali, an India business man and friend of the Ras, revealed in his diary, “…for his hospital he asked me to bring from abroad, medical experts.”

As unofficial Minister for Education, he was the first to send a student abroad. This student, Fetawrari Takel, was later instrumental in preparing the first Ethiopian Constitution.

Undoubtedly, Ras Makonnen was larger than life. His statue was simply the story of a legend, helping to narrate the good deeds of his past, so they would be known by and inspirational to, the present and future generations.

Speaking of the future generations, Laureate Afewerk said, “It was not by accident that Ras Makonnen’s statue was facing the coastline of the colonizers. It was placed in this direction to invoke the vigilante spirit in the coming generations, and proclaim that the war is not yet finished.”

In Harar, the anti-Ras Makonnen movement displays various characteristics. In the city, it aimed to eradicate his icons symbol, and eventual to establish an Islamic State in the three regions: Harar, Bali, and Aris, which are the predominately Muslims areas.

Before the withdrawal of Ras Makonnen’s statue, number of wickedness have been made by government between 1993 and 2020. Anything that carries the name of Ras Makonnen and Emperor Haile Selassie has been removed from Harar. For example, an assembly hall that was named after Ras Makonnen was renamed after Amir Abdullahi, the last Emir of Harai. The Emir deserved to have something in his name, but why did this have to come at the expense of the Ras. Wouldn’t it have been good if they had built a new grand hall and named it after the Amir?

Another small statue of the Ras was also removed from the hospital that was built in 1903. This hospital and the statue were built by Russia to show the relationship between the two countries. Mohammed Ali in describing the people of Harar and Ras Makonnen, wrote, “People of Harar were generally addicted to Qat (Khat), but Ras Makonen was addicted to advancement. Every time I told him of a new innovation abroad, he wanted me to bring it in to Harar.”

Mohammed Ali and Ras Makonnen relationship begun when Lij Tafari (Emperor Haile Selassie) was 3 years old.  Ali wrote, “One year before Ras Makonnen passed, and he implored me to look out for Lij Tafari, his son in case he died.” Ali kept his word and took great care of Lij Tafari. As a god father, he built a big mansion for Tafari when he turned 18 years old. The following year, the young Tafari welcomed his wife, Woizero Menen Asfaw in this house. This historical house in 2007 was reclaimed by the local Harari government and was given to an individual to be a private museum.

On the other hand, the local government dedicated a museum to Arthur Rimbaud, a French poet and an arms dealer who only lived for 5 years in Jegol, Harar. His museum is located a short distance from the houses of Ras Makonnen and Emperor Haile Selassie, which were confiscated by the government. If Rimbaud has a museum, what about Ras Makonnen and Emperor Haile Selassie, the towering personas, who lived, labored, and toiled for the people of Harar?

125 years ago during the march to the Battle of Adwa when Ras Makonen led his army and volunteers from all over Harar region, the Harari(Adere) people did not follow him. Now their great sons and daughters have the nerve to destroy his legacy, and bring down his statue.

These people were supposed to be the first to defend his statue. Without his help, they would have remained in their small areas. Today, Harari business men and women are among the most successful in Addis Ababa. As old saying goes, “To a person who lends gold, a pebble is returned.”

Among the standing legacies of the Ras, one that stood tall, was his making the province of Harar to be known as “Yefeker Hager” (Love City). To keep this memory alive, in 2003, UNESCO officially named the City of Harar “The City of Love”.

According to UNESCO’s official statement, “Ras Makonnen is considered as one of the peace makers of the region. Without him, Harar would have been a playground of hate. To bring Muslims and the new settlers of Christians on one table, it took the vision of Ras Makonen.”

It is my sincere hope that Lij Daniel Mesfin Jote, the current president of the Ethiopian Patriot Association, will raise the issue of Ras Makonnen’s statue when he addresses the nation on March 1, 2021. History should record this year’s celebration as a turning point, to examine the heroic characters of this generation.

What happened in Harar, could unfortunately happen in Addis Ababa to Emperor Menelik’s statue, unless we learn from this regrettable mistake.

In 1936 when the fascist Italians occupied Addis Ababa, they removed the statue of Menelik from Addis Ababa, but did not cut it into pieces. However, the officials of Harari allowed that to happen to the statue of Ras Makonnen. These perpetrators have made the Italian fascists look kinder and less destructive.

Some of smashed statue of Ras Makonnen

It would be wise if Ethiopians at home and abroad use this year’s celebration as a platform to raise the issue of Ras Makonen’s statue. It would be wise also if the Federal and local government use the event as an opportunity to create peace and reconciliation, starting to rebuild the statue and restore the iconic statue.

Ras Makonnen did his part to maintain Ethiopia’s freedom. As the same time he maintained his province to be a big melting pot of various culture.  Throughout, his life, he was a proven war hero and skilled diplomat. So what about us? Who shall we prove to be? Keepers of his legacy, or tribalists, and cheer leaders of colonialists?

History is recording our silence.