“This, coupled with industry-leading reliability and maintainability, is what customers have told us they wantOpens a New Window.. As a result, we are seeing overwhelming demand for this new and improved version of the 737. We are working with our customers to finalize these and other agreements in the weeks and months ahead.”

BoeingOpens a New Window. rolls out its first 737 MAX jet in Renton, Washington with a goal of a first flight the following year.

According to the press release announcing the launch, “The new single-aisle airplane will deliver 20 percent lower fuel use than the first Next-Generation 737s and the lowest operating cost.”

Boeing marked the first delivery of the new 737 MAX. The airplane, a 737 MAX 8, was handed over to Malindo Air at the Seattle Delivery Center. The Malaysia-based airline will be the first to put the 737 MAX into commercial service.

A Lion Air Boeing 737 MAX 8 crashes into the Java Sea shortly after taking off from an airport in Jakarta, Indonesia, killing all 189 people on board.

Boeing details what pilots should do if a sensor failure erroneously triggers an automated flight-control system called MCAS that may cause the plane to pitch downward, a scenario suspected in the Lion Air crash.

Boeing’s bulletin provides the first description of MCAS, which pilots and airlines had previously been unaware of, according to reports.

In a FOX Business exclusiveOpens a New Window., Boeing CEO Dennis Muilenburg said the company plans to continue to “fully cooperate” in the investigation into last month’s fatal Lion Air Crash in Indonesia.

Despite the crash, Boeing reportedly has 5,011 orders for the new 737 MAX from 79 customers through the end of January.

An Ethiopian Air flight crashes shortly after takeoff on its way from Addis Ababa to Nairobi, Kenya, killing all 157 people on board. The circumstances of this crash were similar to Lion Air.

A number of countries around the world close their airspace to the Boeing 737 MAX planes, with Canada and the U.S. remaining key holdouts. Aviation regulators in China, Indonesia, Australia and Europe are among those banning the plane. The FAA releases a statement noting that it will not ground the 737 MAX. Amid the crisis, President Trump weighs in via a tweet, stating planes have become “too far complex” but stops short of mentioning Boeing by name.

Airplanes are becoming far too complex to fly. Pilots are no longer needed, but rather computer scientists from MIT. I see it all the time in many products. Always seeking to go one unnecessary step further, when often old and simpler is far better. Split second decisions are….

62.4K people are talking about this

….needed, and the complexity creates danger. All of this for great cost yet very little gain. I don’t know about you, but I don’t want Albert Einstein to be my pilot. I want great flying professionals that are allowed to easily and quickly take control of a plane!

40.6K people are talking about this

Following analysis of the new Ethiopian Air crash data, the FAA issues an emergency order, temporarily banning the aircraft from flying in the U.S. or entering its airspace, citing “new evidence” from the Ethiopian Airlines crash. FAA concluded that it saw similarities between the two crashes based on recently analyzed satellite data and evidence investigators found in the wreckage in Ethiopia.

Boeing also releases a statement saying it remains confident in the aircraft’s safety but recommends a temporary suspension of operations of the global fleet.

Information retrieved from the “black boxes” of the Ethiopian Airlines crash shows “clear similarities” to the October Lion Air crash. A Seattle Times report revealed that deadline pressure prodded the FAA and Boeing to delegate more safety decisions to the plane maker’s engineers working on behalf of the FAA.

The Wall Street Journal reports that a federal grand jury in Washington, D.C., issued a broad subpoena dated March 11 to at least one person involved in the 737 MAX’s development, seeking related documents, including correspondence, emails, and other messages.

Transportation Secretary Elaine Chao called for her agency’s internal watchdog to open an inquiry into the process the department followed to certify the Boeing 737 MAX, saying that “safety is the top priority of the department.”

It is reported that the FBI has joined the DOT’s criminal investigation into the certification of the Boeing’s 737 MAXOpens a New Window.. Senator Ted Cruz (R-TX) also announces he will hold a Commerce subcommittee hearing to examine the government’s oversight of the jet.

Boeing unveils new fixes to the MCAS software system and says it plans to send the software updates and new plans for pilot training to the FAA for approval by the end of the week.

The investigation into the Ethiopian Airlines crash reaches a preliminary conclusion that the MCAS “activated before the plane nose-dived into the ground,” according to a Wall Street Journal report.

FAA says Boeing is expected to submit its proposal for new fixes to the MCAS software system “over the coming weeks,” emphasizing more time is needed “for additional work” to ensure that Boeing “has identified and appropriately addressed all pertinent issues.”

Upon receiving the fix, the FAA said it will “subject Boeing’s completed submission to a rigorous safety review … [and] will not approve the software for installation until the agency is satisfied with the submission.”

Boeing says it has identified an additional software issue the FAA will require to be repaired before the planes are cleared to fly again. It characterizes the newly detected issue as “relatively minor,” but the Washington Post reports the problem is still classified as “critical for safety.”

Boeing announces plans to cut MAX productionOpens a New Window. by 20 percent, to 42 aircraft per month.

What do I know about branding, maybe nothing (but I did become President!), but if I were Boeing, I would FIX the Boeing 737 MAX, add some additional great features, & REBRAND the plane with a new name.
No product has suffered like this one. But again, what the hell do I know?

62.5K people are talking about this

Boeing said it knew of a safety alert flaw in the cockpit of its 737 MAX jetliners months before the first of 2 fatal crashes involving the now-grounded aircraft, but it didn’t immediately notify regulators.

Bloomberg interviewed a handful of former Boeing employees who described a corporate culture that prioritizes cost-cutting and profitability over reporting plane defects to upper management.

A preliminary conclusion from an internal FAA review has “tentatively determined that senior agency officials didn’t participate in or monitor crucial safety assessments” of the MCAS system, per the Wall Street Journal.

The head of Boeing acknowledged that the company “clearly fell short” in dealing with the accident-ridden 737 MAX and said that it had not adequately communicated with regulators.

Muilenburg was pressed by CBS about failing to notify the FAA for more than a year that the company had deactivated a signal designed to advise the crew of a disagreement between the plane’s “angle of attack” sensors, which measure its angle vis-a-vis oncoming air to warn of impending stalls.

The sensors provide data to the Maneuvering Characteristics Augmentation System, a flight handling system connected to the deadly crashes of Lion Air and Ethiopian Airlines MAXs.

U.S. air-safety regulators said nearly 150 parts inside the wings of more than 310 of Boeing  737 jets, including grounded MAX models, may be defective and need to be replaced.

Reports suggest that Boeing planned to wait three years to fix a nonworking safety alertOpens a New Window.on its 737 Max aircraft and sped up the process only after the first of two deadly crashes involving the planes.

The company acknowledged that it originally planned to fix a cockpit warning light in 2020 after two key U.S. lawmakers disclosed the company’s timetable Friday.

Reps. Peter A. DeFazio (D-Ore.) and Rick Larsen (D-Wash.) wrote to Boeing and the Federal Aviation Administration and asked why the company took more than a year to tell the safety agency and airlines that the alert did not work on Max jets.

The feature, called an angle of attack alert, warns pilots when sensors measuring the up-or-down pitch of a plane’s nose relative to oncoming air might be wrong.

American Airlines announces it is extending cancellations for the 737 MAX through Setpember 3, 2019

Boeing said Tuesday that it delivered 30 commercial airliners in May, a 56% drop from a year ago, when 68 jets were delivered. Deliveries of 737s dropped from 47 last year to just eight last month, all of which were an older model of the jet.

The Chicago-based company has 4,550 unfulfilled orders for the Max, but stopped deliveries after regulators around the world grounded the jets following crashes in Indonesia and Ethiopia that killed 346 people.

FAA official says 737 MAX could be back in the air by December.

It’s not possible to give an exact date as work progresses on safety fixes to the aircraft, said Ali Bahrami, the Federal Aviation Administration’s associate administrator for aviation safety, in an interview Wednesday at a conference in Cologne, Germany.

Southwest Airlines joins AA in removing the Boeing 737 Max from its schedule through the start of September.

Boeing’s chief executive said on Sunday that the company made a “mistake” in how it handled a cockpit warning lightOpens a New Window. on the 737 Max. Dennis Muilenburg, the executive, made the comments while addressing reporters on the eve of the Paris Air Show. Mr. Muilenburg also said the company’s “inconsistent” communication with regulators and customers about the warning light was “unacceptable.”

Boeing Chief Financial Officer Greg Smith revealed the possibility of a name change for the 737 MAX while speaking to Bloomberg on the sidelines of the Paris Air Show.

Boeing executives later pushed back on this report.

It’s reported that Boeing Co. ended a two-month drought of orders for its airliners in the wake of the grounding of its 737 MAX fleet, by securing a commitment from Korean Air Lines Co. Ltd. and Air Lease Corp. to buy 787 Dreamliners. Previously, Boeing had not announced any new sales since late March, shortly after its bestselling jet, the 737 Max, was grounded. 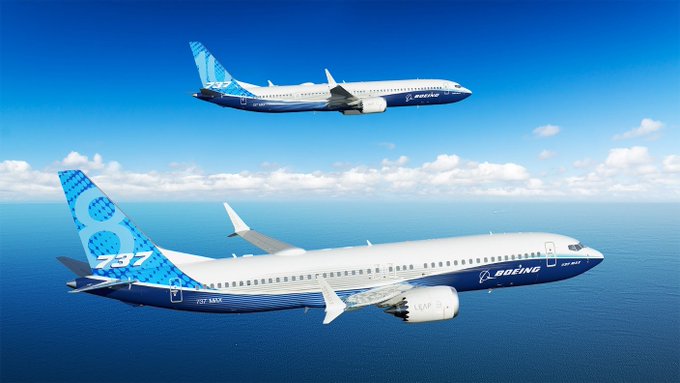 Thank you International Airlines Group for your trust and confidence in the 737 MAX and the people of Boeing: IAG Announces Intent to Buy 200 Boeing 737 MAX Airplanes. #PAS19

*Sources compiled from FOX Business’ reporting as well as major news outlets including The Associated Press, The Wall Street Journal, Reuters and others.