“The Amhara forces must leave western Tigray (northern Gonder) immediately….and must be replaced by security forces that will not abuse the human rights of the people of Tigray, or commit acts of ethnic cleansing in western Tigray.”

-Antony Blinken, US secretary of state.

“US forces must leave northern Mexico- now known as Texas, should withdraw all the way to the 42nd parallel immediately….and must be replaced by security forces that will not abuse the human rights of the people of Mexico or people of Mexican origin, or commit acts of ethnic cleansing in northern Mexico (Texas). Woe betides any US personnel who lingers around all 28 bridges and crossings. Texas belongs to Mexico.”

– Bekele Getahune, Secretary of state for the historic Amhara land of WOLKAIT-TEGEDE.

Hypothetically, this is the right comparison to draw and both ways, it is a blatant interference in the domestic affairs of the mentioned countries. Imagine how White House press secretary Jen Psaki and NATO secretary general Jens Stoltenberg would respond to such “anti US” statements issued by a tiny land known as Wolkait-Tegede. After the customary “all options are on the table” rhetoric, bone-chilling   condemnation will come first, followed by a threat of war and a threat of crippling economic sanction.

As for the agriculture and livestock rich Amhara land called Wolkait – Tegede, the birthplace of several paramount Amhara kings and obdurate Amhara guerrilla fighters, the future looks frighteningly gloomy. That is largely because of America’s interference in the very internal issues of Ethiopia, attempting to offer Wolkait to the iron – curtain province of Tigray as gateway into the outside world via Port Sudan against the will of the Amhara people who are the rightful owners of that strategic tongue of land.

Currently, US secretary of state Antony Blinken and USAID boss Samantha Power are spearheading the campaign to do what historians call a “population exchange” by fraudulently and deliberately referring to Wolkait as “Western Tigray”.

However, Wolkait has never been part of Tigray until it was annexed by the late despot Meles Zenawi in 1991, which was shortly after the ragtag TPLF bandits marched on Addis Ababa, seizing power and ruling the country with unparalleled   brutality for the next three decades.

During her recent visit to Ethiopia, the iron lady of US politics who played part in the total annihilation of Libya, Samantha Power stated that the Biden administration isn’t looking to pick sides in the conflict between Ethiopia proper and the secessionist TPLF rebels. According to her, what the US need is the opening of a humanitarian corridor through Wolkait to quickly reach the ‘starving’ people of Tigray.

That is without addressing Ethiopia’s security concern in the face of sporadic attacks by the notorious Samri brigade and the occasional skirmishes between Sudanese soldiers and Amhara militias.

Samri brigade is group comprised of ethnic Tigrayan youth that allegedly committed the blood-curdling My-Kadra genocide and fled to Sudan.

Moreover, why is the US adamant that the so called “non-lethal” (if it is indeed non-lethal) aid must travel for a grueling 1306.8 KMs from Port Sudan via Wolkait to Mekelle while the Eritrean port of Massawa is only 398KMs away???

In addition, the Map below shows that the distance between Djibouti and Mekelle is under 780 KMs.

Why WOLKAIT will never be part of Tigray 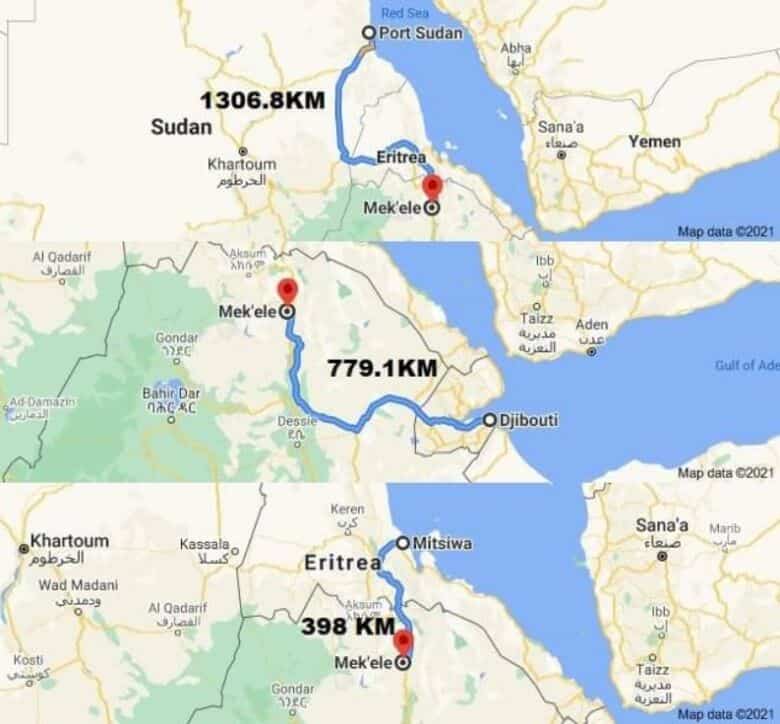 This rabble-rousing, centuries old Hellenistic style pastoral poetry authored by the shepherds of Wolkait speaks mountain’s worth about the Amhara people’s sense of heroism and patriotism. It also speaks volume about the dual identity of the Amharas of Wolkait both as peasants and warriors.

They lived in that pristine land of milk and honey from time immemorial, preventing foreign invaders from reaching the interior of the Ethiopian kingdom. Wolkait has been an impregnable fortress throughout our proud history and it is the crown jewel of Ethiopia’s never been colonized status.

The forefathers of current generations, for centuries, repeatedly fought off expansionist Sudanese and Egyptian conquerors, even smashing the much feared Ottoman forces.

However, according to present day historians such as the late Richard Pankhurst, the Amharas of Wolkait have never got a chance to beat their rifles back to plowshares when suddenly fell victims to Tigray’s Roman styled, extremely brutal occupation.

After the annexation in 1991, for more than 27 years, the Amharas of Wolkait were left to the mercy of the ruthless and genocidal TPLF warlords, forgetful of the world by whom they were totally forgotten.

Their plea for justice was ignored by the so called international community for nearly three decades.

“We are not immigrants from across the Red Sea, we sprout from the soil of Wolkait and we are Amharas of Wolkait. But they (TPLF warlords) treated us like pawns on the chessboard of humanity for nearly 30 dark years. Our sad story is very similar to the colonial era   stories of southern Rhodesia, Transvaal and Orange Free State here in South Africa. Settlers from Tigray poured into our region and took- over every inch of our ancestral land. Overnight, we became farm laborers and forcibly packed into newly established, overcrowded shanty towns across Wolkait.” Ato Nigusu, 54, an academic who lives and works in Pretoria-South Africa told this writer. He refers to himself as a proud Amhara of Wolkait and a patriotic Ethiopian.

“The genocide and the ethnic cleansing campaign against ethnic Amharas in Wolkait, committed by TPLF warlords was secretive and systematic. From denying us the vital Anti-malaria medication, the TPLF warlords went as far as injecting all Amhara women in the annexed Wolkait districts with the birth control Depo-shot (Depo-Provera). That was criminal…..unforgivable.” the academic added showing me a verse in his bible from the book of Jeremiah 23:3

“I will plant them on their land, and they shall never again be uprooted out of….”

“I read this verse every day for the past 27 years.” the likable academic concluded, condemning the victim shaming campaign of some US officials against the brutalized people of Wolkait.