Abebech Gobena (Amharic: አበበች ጎበና; Afan Oromo: Abbabachi Goobanaa; 1938 – 4 July 2021) was an Ethiopian humanitarian, and the founder and manager of AGOHELMA, one of the oldest orphanages in Ethiopia. She was often called the Mother Teresa of Africa.

Abebech was born in 1938 in a small rural village in Amhara Governorate called Shebel. Her father was killed during the Second Italo-Ethiopian War, so she was raised by her grandparents until the age of nine. At the age of 10, she was married without her consent, but she ran away to the capital, Addis Ababa. There, she managed to get basic education and later worked as a quality controller at a coffee and grain company.

She went to Gishen Mariam, Wollo Province, for pilgrimage in 1973. At the time, the area was severely stricken by famine. In a feeding center, Gobena saw a child next to her dead mother. She distributed the only thing she had to other victims, a loaf of bread and five liters of holy water, and brought the child along with another orphan to her home in Addis Ababa. In one year, she brought 21 children to her home.

Abebech Gobena Yehetsanat Kebekebena limat Mahber (AGOHELMA) was founded by Abebech in 1980 and has become one of the earliest oprhanages serving youth in the Ethiopia. AGOHELMA provides various services in addition to the orphanage itself, including formal and non-formal education, HIV/AIDS prevention activities, habitat improvement and infrastructure development, empowerment of women, among others. Additionally, it provides institutional care for 150 orphans. Since its establishment, over 12,000 needy children have been supported by the association with over 1.5:million people having benefited either directly or indirectly from the association in different regions of the country.

Read Aloud:   THE LAST DAY OF EMPEROR TEWODROS II’s LIFE AND THE LOOT OF MAGDALA

In June 2021, Abebech’s health worsened from COVID-19 and she was hospitalized at St. Paul’s Hospital in Addis Ababa. However, she died from the complications on 4 July 2021.Her burial took place on 6 July at Holy Trinity Cathedral with government officials and mourners. Patriarch of the Ethiopian Orthodox Church Abune Matias, President of Oromia Region Shimelis Abdisa, Deputy Mayor of Addis Ababa Adanech Abebe and other public figures also attended the funeral.

Description above from the Wikipedia article Abebech Gobena, licensed under CC-BY-SA, full list of contributors on Wikipedia.

Abebech Gobena, the ‘Mother Teresa’ of Africa, Dies at 85

She created one of Ethiopia’s largest orphanages and through it saved thousands from starvation and disease. She died of complications of Covid-19. 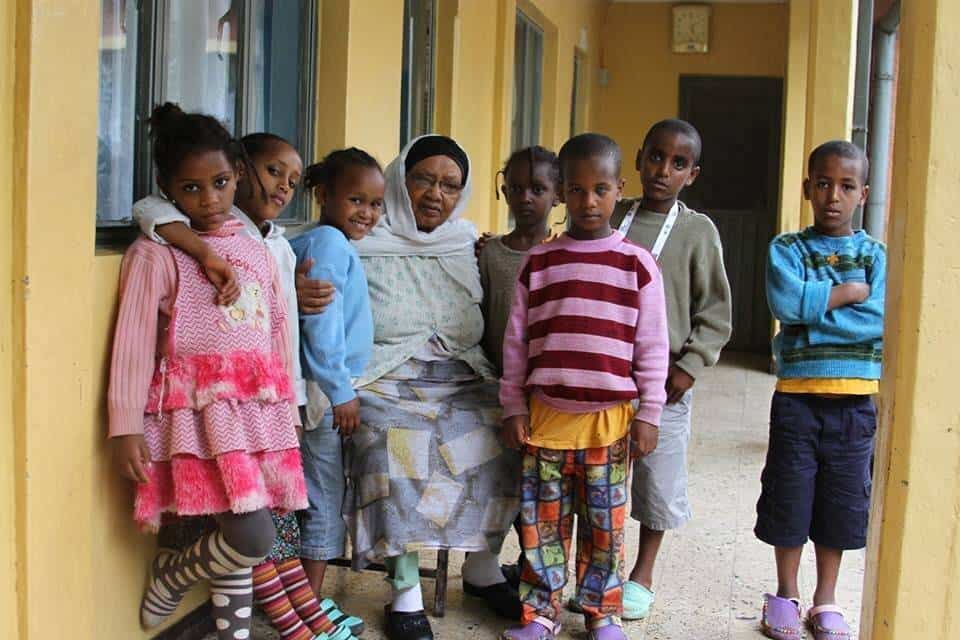 Abebech Gobena was returning from a pilgrimage to the holy site of Gishen Mariam, about 300 miles north of the Ethiopian capital, Addis Ababa, when she saw the woman and her baby.

It was 1980, and Ms. Gobena was passing through an area recently stricken by drought and an accompanying famine. All along the road were bodies — many dead, some dying, some still able to sit up and ask for food.

“There were so many of these hungry people sprawled all over, you could not even walk,” she said in a 2010 interview with CNN. She handed out what little she had — a loaf of bread, a few liters of water.

At first, Ms. Gobena thought the woman was asleep, and she watched as the baby tried to suckle at her breast. Then she realized the mother was dead.

A man nearby was collecting bodies. He told her he was waiting for the child, a girl, to die.

Without thinking further, Ms. Gobena picked up the baby, wrapped her in a cloth and took her home to Addis Ababa. She returned the next day with more food and water.

“One of the men dying by the side of the road said to me, ‘This is my child. She is dying. I am dying. Please save my child,’” she recalled. “It was a terrible famine. There were no authorities. The government at that time did not want the famine to be public knowledge. So I had to pretend the children were mine and smuggle them out.”

By the end of the year she had 21 children living with her and her husband, Kebede Yikoster. At first supportive, he eventually gave her an ultimatum: him or the children.

Ms. Gobena left him, and most of her possessions, taking the children to live with her in a shack in the woods. She sold her jewelry to raise money, then eked out an income selling injera bread and honey wine. Unable to pay the children’s school fees, she found a tutor to visit the shack.

She took in more children, and after years of battling government bureaucracy in Ethiopia, in 1986 she managed to register her organization — Abebech Gobena Children’s Care and Development Association — as a nonprofit, enabling her to raise money and accept grants.

She bought farmland outside Addis Ababa, where she and the orphans worked, and sold the produce to fund the orphanage. They also built dozens of latrines, public kitchens and water points around the city.

Today the organization, known by its acronym in Amharic, Agohelma, is one of the largest nonprofits in Ethiopia. Along with its orphanage, it provides free school for hundreds of children, HIV/AIDS prevention and maternal health care — according to its own estimate, some 1.5 million Ethiopians have benefited from its services since 1980. They and many others call her the “Mother Teresa of Africa.”

In June Ms. Gobena contracted Covid-19. She entered the intensive care unit at St. Paul’s Hospital in Addis Ababa, where she died on July 4. She was 85. Yitbarek Tekalign, a spokesman for Agohelma, confirmed her death.

“Abebech Gobena was one of the most selfless and pure-hearted people I ever met,” Tedros Adhanom Ghebreyesus, the director-general of the World Health Organization and a former Ethiopian minister of health, said in a statement. “She helped many children not only to survive, but succeed in life.”

Abebech Gobena Heye was born on Oct. 20, 1935, in Shebel Abo, a village north of Addis Ababa in what was then Shewa Province. That same month, Italian forces in Eritrea invaded Ethiopia, setting off the Second Italo-Ethiopian War. Her father, Gofe Heye, was a farmer who died in the fighting.

The tragic prince of Abyssinya in Malta