This week it was announced that Iran and Argentina had applied to join the BRICS.  The BRICS — which until recently has been made up of Brazil, Russia, India, China, and South Africa — is a forum that allows countries outside of Western developed economies to forge alliances on economic issues. As it gets larger, its influence and economic importance grows.

Last week at one of the BRICS forums President Putin announced that Russia, alongside China and other BRICS nations, was getting ready to launch a new global reserve currency made up of a basket of BRICS currencies. If successful, such a reserve currency would be a direct threat to the currently dominant US dollar.

It is difficult not to read the two stories as part of the same general arc. Iran and Argentina are jumping on the bandwagon because they sense an opportunity to build an alternative alliance to Western-led globalization. Meanwhile, the other BRICS members are inviting them on board because they smell blood because they see large economic weaknesses being exposed by the quick collapse of the Western sanctions against Russia.

Could a new trade bloc with its own reserve currency be a threat to the West and to US dollar dominance? Almost certainly. In their current form the BRICS make up around 31.5% of world GDP when adjusted on a purchasing power parity basis. With Iran and Argentina added, this rises to 33% of world GDP. This is a huge potential trade bloc, and 33% of global GDP is certainly enough to justify a reserve currency.

But beyond this, the potential for synergies between the countries is enormous. Taken together, the expanded BRICS countries currently produce around 26% of global oil output and 50% of iron ore production used to make steel. They produce around 40% of global corn production and 46% of global wheat production. If these were all traded in the new reserve currency, it would instantly become a cornerstone of the world economy. 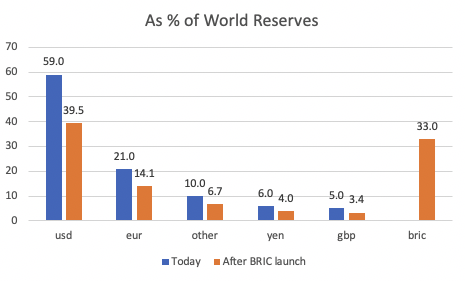 Meanwhile, the US dollar is already sagging. At the beginning of June, the IMF released a report showing that the US dollar today makes up 59% of global reserves — a far cry from the 70% it made up in 1999. The report noted that central bank reserve managers were actively shifting their portfolios away from dollars and into non-traditional currencies.

Now imagine what that would look that if the BRICS launched its reserve currency — let’s call it the ‘BRIC’. Assume that the BRIC was held as a reserve roughly in line with the bloc’s importance in terms of global GDP and that it took a bite out of all other reserve holdings equally. The impact would look something like the chart below. As we can see, even this simple exercise shows that the BRIC would easily hold its own against the US dollar.

The changes that are taking place in the global economy are certainly the biggest that have been seen since 1945. Yet there is very little discussion of it in the press or in political circles. Are Western leaders planning for this? Do they have a strategy for this brave new world? We should hope so, as these upheavals could drastically impact Western living standards and our place in the world.